A Standard for
Ultrasound Visibility
Cornerstone Reflectors made it possible!

‘‘Hi, we are Rosi and Florian Weck 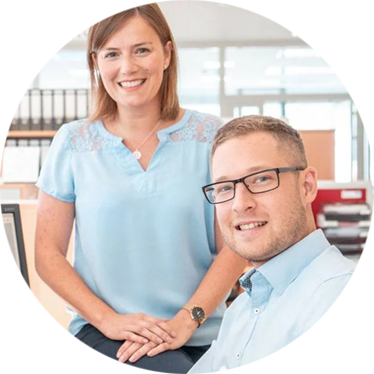 In collaboration with Dr. Chris Mitchell, we have succeeded in creating an effect that allows the ultrasound to always return to the transducer, thus generating the best possible ultrasound image.

What are Cornerstone Reflectors?

With the patented Cornerstone reflectors (three-dimensional pyramid-like embossing along the first 20mm of the needle), the needle shaft is much easier to see and allows optimised needle visualisation at any angle.1,2,3 They are key to the echogenicity of many of our products.

How it all started

The idea was born by the Australian anaesthetist Dr Chris Mitchell, who was not satisfied with the limited visibility of conventional needles under ultrasound until he found the solution to the problem in many everyday things: reflectors. He had tools made on his own and, after a six-month test phase, went in search of a suitable industrial partner. When he got to know Pajunk, he was convinced especially by our passion and technical know-how:

“It was an amazing experience to join up with Pajunk, to work so much as a team and nearly family, to get this product onto the market as quickly as possible. And literally from the time I met them in person to the time the product was on the market was only 12 months.”

We rely on the Cornerstone Technology in different fields of applications. They can be found in the Regional Anaesthesia for Nerve Blocks and also for needles in the fields of Chronic Pain Therapy, Biopsy and Vascular Access.

Increased patient safety due to optimal visualisation under ultrasound.

The Best Nerve Block Needle Ever?"